“I am deeply interested in India, in the people and their religions, and histories and social systems, and as I was sixteen years in the country I had an opportunity of receiving lasting impressions, and of gaining invaluable experience.” ~ Alice Perrin

“Miss Perrin seems to possess remarkable knowledge of the region and the people of whom she writes…. Not even Kipling has written more convincingly, though with more vigor and picturesqueness, of the heart and the soul of that queer product of the meeting of West and East.”
~ Review of The Charm from The New York Times, 22 October 1911 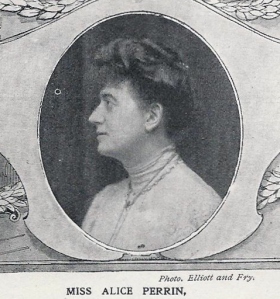 From the Illustrated London News (February 1909)

I discovered Alice Perrin and her work while completing my book Women’s Ghost Literature in Nineteenth-Century Britain (published by the University of Wales Press in 2013), which included a section on the Anglo-Indian ghost stories of her contemporary, Bithia Mary Croker (c.1850-1920). I was then led to Richard Dalby’s “The Sistrum” and Other Ghost Stories, published by Sarob Press in 2001 and part of their excellent “Mistresses of the Macabre” series, edited by Mr. Dalby. After reading the tales included in the edition, I immediately wanted to find out more about Alice Perrin and read as much of her work as I could find. After a few years of additional research, I completed a scholarly edition of Perrin’s first short story collection, East of Suez (1901), published by Victorian Secrets in 2011.

If anyone has a similar interest in Alice Perrin or knows about possible manuscript sources or other Perrin-related items in private collections, I would very much appreciate hearing from you. Also, if anyone has more information about the Perrin or Robinson families (especially the lives of her parents, John Innes Robinson and Bertha Beidermann Robinson), or information on possible living relatives, I would be delighted to know.